This week we celebrated #BritishFlowersWeek, an annual celebration of all things British Flowers, from cut flowers, plants and foliage to the growers and the independent florists working with them (more on this below!). P.S we have some excellent flower growers here in Wales, find your local grower here!

But what else has been happening in the? We round-up our favourite horticulture news items from the week…

It was announced this week that Ocado, the online grocery specialist, is investing £17m in high-tech farming with the aim of growing herbs and other produce alongside its robot-run distribution centres around the world. The online grocery specialist has bought a 58% stake in Jones Food, a “vertical farm” that grows 420 tonnes of basil, parsley and coriander a year in stacked trays under 12km (7.5 miles) of LED lights in a warehouse in Scunthorpe.

This news came as Sainsbury’s launched its Future of Food report which featured indoor and rooftop farming. The Future of Food Report says that by 2025, "spaces that would otherwise be unused - underground tunnels, disused warehouses etc" will offer "new opportunities" for urban food growing. It also states, by 2025 we could see a rise in on-site cultivation of herbs, micro-greens, salads and shoots, be they vertical or rooftop growing, starting to feature in homes, at restaurants, canteens and supermarkets.

The online grocery specialist Ocado is investing £17m in high-tech farming with the aim of growing herbs and other produce alongside its robot-run distribution centres around the world.http://ow.ly/FOt150uC53O

Ocado invests in 'vertical farms' to grow produce near distributors

Ultra-local fresh produce and novel exotic crops grown on rooftops or via vertical farming will gain ground over the next six years, according to the Future of Food report from supermarket Sainsbury's. http://ow.ly/YiZw50uB9OS 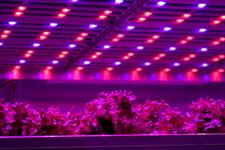 The #BritishFlowersWeek campaign is now in its 7th year, after being established by the New Convent Garden Market to promote the industry. Last year, the hashtag #BritishFlowersWeek was seen by millions of people on social media, reaching 12.7 million people on Twitter and 2.4 million on Instagram. But is the campaign helping the industry to grow? The Agriculture in the United Kingdom 2018 report calculated that UK cut flowers in 2018 had a production value of £121m versus a total value of £860m (the total is worked out as: UK flower production plus cut flower imports minus cut flower exports). It also found that in 2018 14% of flowers sold in the UK were home-grown (based on value). This is in contrast the 2016 NFU report, Backing British Blooms, which estimated the value of UK cut flower production in 2015 at £82m, which equated to 12% of flowers sold in the UK.

To mark #BritishFlowersWeek 2019, Co-op have also become the second supermarket to sign the NFU Plants and Flowers pledge, joining Aldi in assuring fair treatment of all suppliers in accordance with the Groceries Supply Code of Practice to British growers.

In order to celebrate #BritishFlowersWeek we took a look at the market by asking, Is the 'Grown not Flown' trend catching on?

We have some amazing flower growers here in Wales. We have been pleased to support Welsh @Flowers_ft_Farm members with funded #training and to attend events such as @royalwelshshow

You can find your local flower grower here: https://www.flowersfromthefarm.co.uk/members-map/region/wales … 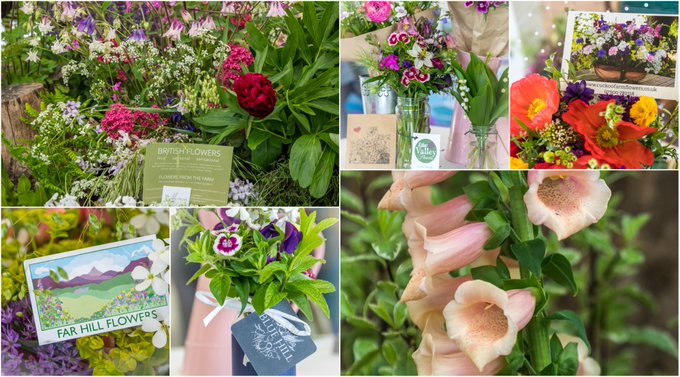 Very fitting to have these #lovely photographs from our recent photoshoot with Welsh @Flowers_ft_Farm members #BigSkyPlants and The Flower Meadow sent through during #BritishFlowersWeek!

Thank you @wholepicturewed Big Sky Plants and The Flower Meadow! 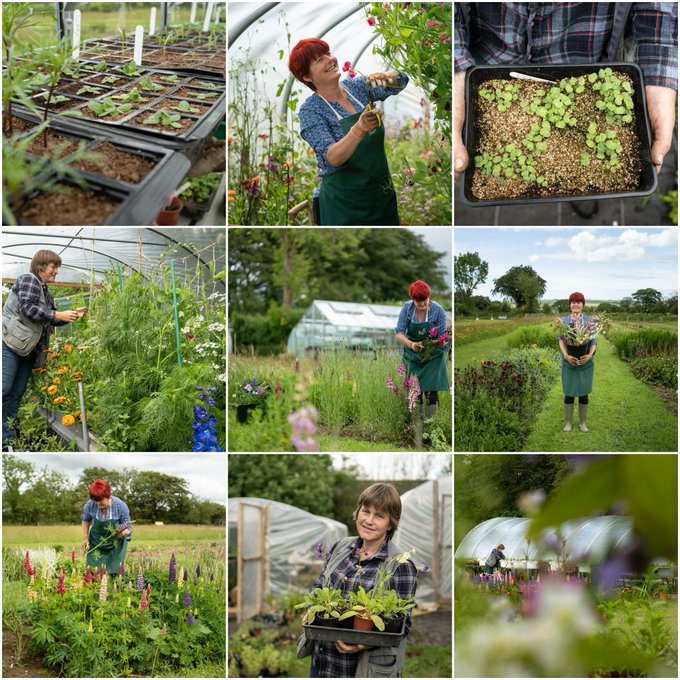 As we head towards the end of #BritishFlowersWeek 2019, we take a look back at to see how the industry has performed since our last insights article on the #GrownNotFlown trend...https://www.tyfucymru.co.uk/news/britishflowersweek-grown-not-flown-trend-catching … 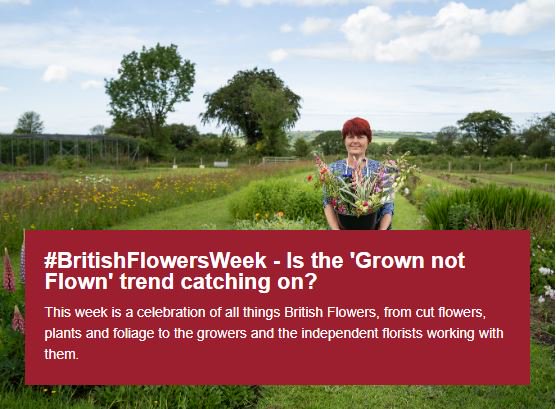 Currently in the UK an estimated 10.2 million tonnes of food and drink worth around £20 billion are wasted annually after leaving the farm gate. This is why around 100 UK agri-food companies and organisations have signed the "Step Up to the Plate" pledge to help halve food waste by 2030.

Sainsbury’s brand director Judith Batchelar said: "Food waste continues to be an urgent and important priority for us to tackle. By working collaboratively with others, from suppliers through to fellow retailers, we can work to eliminate surplus waste within every part of the supply chain process and achieve the impact that we all want to see".

Around 100 UK agri-food companies and organisations have signed the "Step Up to the Plate" pledge to help halve food waste by 2030, They include all of the UK’s major supermarkets, fresh produce suppliers and others.http://ow.ly/54Zy50uDU4H 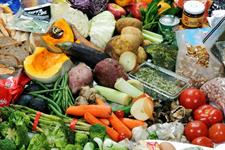 Black plastic pots cannot be easily recycled. Horticulture Week research has found 87% of councils will not recycle plastic pots from the kerbside but the industry is campaigning to change this. An Essex based plant retailer, Beth Chatto Gardens, has launched the idea of offering customers 5p off plants for every pot returned, which they will then re-use or recycle. Customers will be able to exchange their pots for vouchers to use in store.

Many other retailers are also aiming to support their customers to recycle their used black plastic pots by including recycling stations within the stores. Chair of the Nursery Working Group, David Chilvers from The Bransford Webbs Plant Company, who pioneered the recyclable taupe pot scheme, said: "It is quite incredible to see how much progress has been made since last year’s National Plant Show and really encouraging to see businesses coming together to make a change for the greater good of the industry.

It certainly seems like a great idea to encourage consumers to recycle their pots, but is it an incentive that is needed, or is just having the facilities to recycle available enough?

A garden centre in Essex will give customers 5p off plants bought for every clean pot in good condition they return. The returned pots will be re-used by Beth Chatto Gardens. Another step to reduce plastic waste! #ReuseReduceRecycle http://ow.ly/ULUh50uDTQX 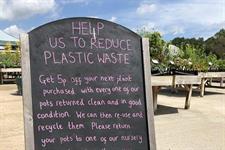 This week we were very excited to launch the new ‘Tyfu Cymru Pumpkin Network’. The networks first study tour took place at Kenyon Hall Farm, a farm shop, cafe, plant centre and pick your own experience near Warrington, England. This gave members of the pumpkin network the opportunity to gain insights, knowledge and to learn about the PYO experience. We would like to thank Kenyon Hall Farm for sharing your experiences and insights.

The launch of the Pumpkin Network is part of 3 new networks being launched. You can read more about the networks here, and its not too late to join, simply complete the online business review on our website, stating which network you would like to join to apply.

Great to launch the #Pumpkin Network with an insightful study visit and workshop.

Thank you to all that attended and to @KenyonHallFarm for hosting and sharing your knowledge.

Welsh pumpkin growers can join the network by completing a business review - https://support.tyfucymru.co.uk/home/online-assessment/ … 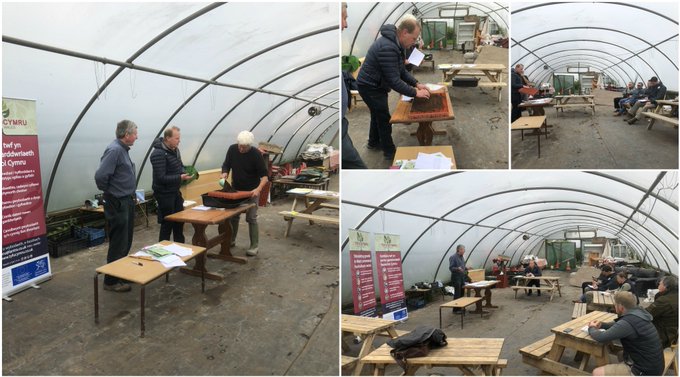